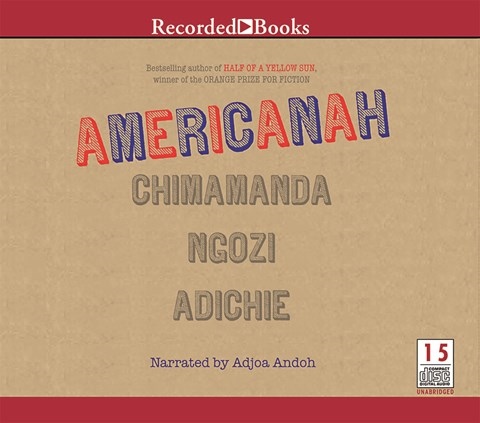 Adjoa Andoh has her work cut out for her narrating the sprawling story of Nigerian college sweethearts Ifemelu and Obinze, who flee "choicelessness" rather than violence. Andoh's rich voice and distinct characters and rhythm keep the listener engrossed even as the plot occasionally meanders. Ifemelu moves to the U.S. for 13 years, attending college, forming serious relationships, writing a blog about race in America, and watching her nephew grow up. But eventually the "cement in her soul" motivates her to move home. Andoh has fun adopting a mocking lilt for Ifemelu's snarky blog entries and politically correct academic friends. A more serious tone brings authenticity to the heartbreak of Obinze's London experience, in which he becomes immersed in the shadowy underground economy of post-9/11 illegal immigration and deportation. Andoh seamlessly shifts accents from Nigerian to middle-class American to American African to working-class British to British African. A.B. © AudioFile 2014, Portland, Maine [Published: MARCH 2014]