Home»Reviews»THE CASE OF THE CRYPTIC CRINOLINE 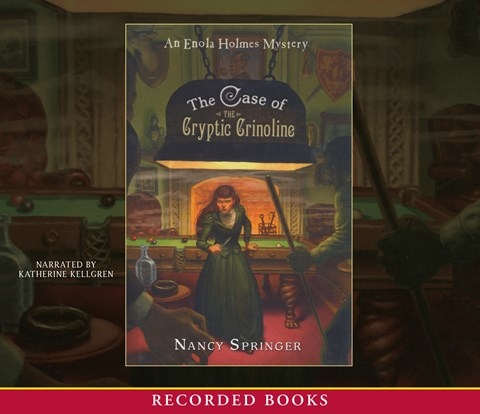 THE CASE OF THE CRYPTIC CRINOLINE Enola Holmes, Book 5

Cantankerous Mrs. Tupper has been kidnapped. But her boarder, 14-year-old Enola Holmes, is hot on her trail, drawing on her art of disguises and deductive powers, usually attributed to her brother, Sherlock. Katherine Kellgren’s spirited narration transports listeners along the cobbled streets and back alleys of London. Fluid accents and tonal shifts between characters make for sparkling dialogue, in addition to accommodating Enola’s various disguises. While Kellgren’s lively performance conveys the light mystery of the plot, she also offers a sensitive portrayal of both Enola and Florence Nightingale’s difficulties as females in a male-dominated culture. Deft pacing delivers a cliff-hanger ending to this scintillating story. M.F. Winner of AudioFile Earphones Award, SYNC 2014 © AudioFile 2014, Portland, Maine [Published: FEBRUARY 2014]