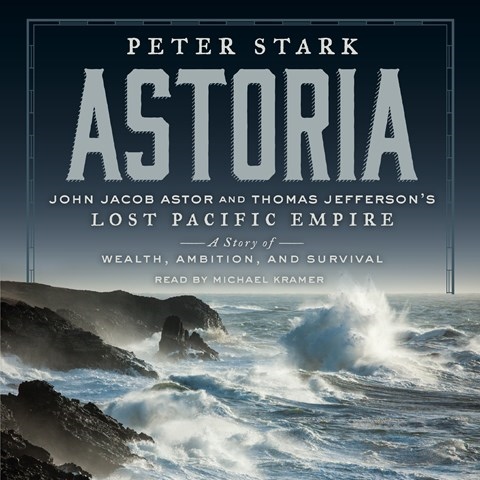 Shortly after Lewis and Clark’s journey, John Jacob Astor launched his visionary quest to establish a permanent American colony on the Pacific coast. ASTORIA is the breathtaking true story of two traveling parties who went there—one by sea around Cape Horn, and one overland by canoe, horseback, and on foot. Michael Kramer narrates Stark’s superb account at a crisp pace. Through Kramer’s voice, the listener can imagine bawdy Scottish fur trappers negotiating with Native American leaders and the lively songs of the French-Canadian canoe masters who were capable of paddling for 15 hours straight. Kramer gravely describes the incomprehensible horrors of being lost in a mountain snowstorm for a month and the anxiety of sailors trapped on a capsizing ship controlled by a madman. An epic chronicle. N.M.C. © AudioFile 2014, Portland, Maine [Published: APRIL 2014]