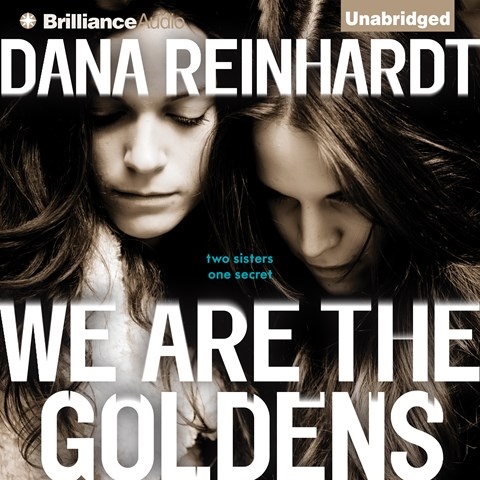 WE ARE THE GOLDENS

Nell is enthusiastic about her freshman year because she’ll attend the same school as her adored older sister, Layla. Julia Whelan narrates a first-person narrative that is voiced as a plea from Nell to her older sister. Nell’s characterization demands a nuanced reading, and Whelan’s layered portrayal is perfect. She emphasizes Nell’s longing to return to childhood, when she felt so united with her sister that she referred to herself as “Nellayla.” Whelan expresses the growing tension as Nell’s loneliness and frustration at their separateness turns to worry and then fear about Layla’s secret life—a hidden affair with the school’s most popular teacher. Whelan dramatizes the changes in Nell as she centers herself with sarcasm, suffers with the truth and ugly school rumors, and struggles to determine a proper course of action. S.W. Winner of AudioFile Earphones Award © AudioFile 2014, Portland, Maine [Published: JULY 2014]