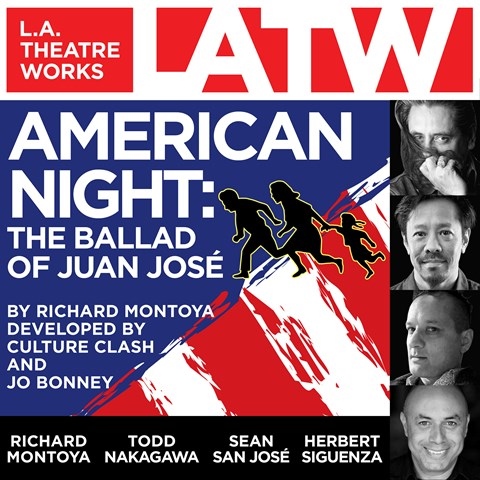 Laughter and applause fill this theatrical look at American history from the perspective of a Mexican who is cramming for his citizenship test. Policeman Juan José, who fled on foot to the U.S. to escape corruption and drug wars, is haunted by Teddy Roosevelt, Sacajawea, Bob Dylan, Jackie Robinson, Violet Pettus (an African-American nurse during the 1928 flu pandemic), Emmett Till, and union leader Harry Bridges, all played with over-the-top accents and comedy by cast members of Culture Clash. Pop references from musicals like THE BOOK OF MORMON, FIDDLER ON THE ROOF, and WICKED, as well as anachronisms like Roosevelt texting, add to the hilarity. The historical selections are sharp, pointed, and thought-provoking. The musical selections, news bites, and delivery make for a performance that simply gets better with each listen. D.P.D. © AudioFile 2017, Portland, Maine [Published: JANUARY 2017]