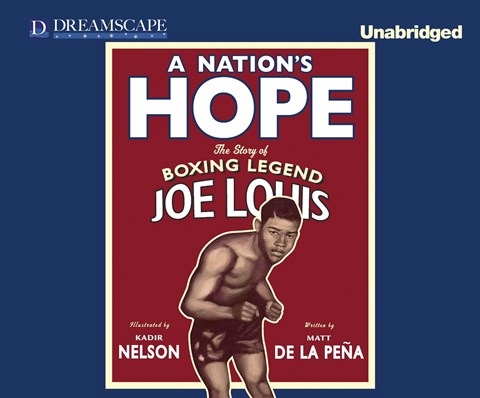 A NATION'S HOPE The Story of Boxing Legend Joe Louis

Brisk period music sets the stage, Yankee Stadium actually, for the 1938 boxing match between Joe Lewis and Max Schmeling. But the scene quickly becomes somber. The match bears “the weight of history” as the African-American Lewis faces a boxer from Hitler’s Germany. Will Lewis come through for his country? JD Jackson’s rich, firm voice underscores the tense mood of the match. In contrast, he conversationally delivers moments that illuminate Lewis’s character—as when he chooses the gym over violin lessons as a young person. Throughout, Jackson’s careful diction and slow pace convey gravitas, inviting listeners to consider the implications of this historic fight in Jim Crow America. A.R. © AudioFile 2014, Portland, Maine [Published: AUGUST 2014]