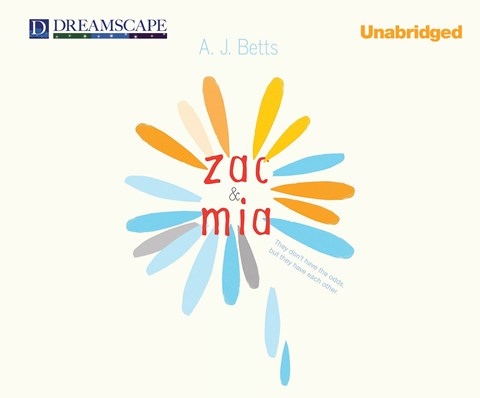 Narrators Kristin Condon and Nicholas Mondelli voice the title characters, two teens residing in adjacent rooms of a cancer ward. The novel begins with Zac’s perspective, and Mondelli brings a world-weary yet hopeful quality to Zac’s voice as he recovers. His pacing is slow and measured, highlighting his feeling of resignation toward his slow treatment. His calmness contrasts with his description of Mia, who is angry, stubborn, and prone to fits of shouting. When Condon later narrates Mia’s perspective, she reveals surprising vulnerability in an internal monologue that adds dimension to her complex character. Condon and Mondelli give thoughtful and subtle readings, but there’s no trace of accent, though the novel, set in Perth, Australia, is peppered with regional words and phrases. E.M.C. © AudioFile 2015, Portland, Maine [Published: MARCH 2015]