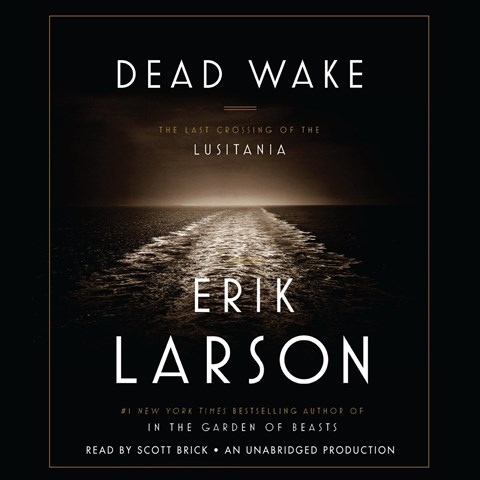 DEAD WAKE The Last Crossing of the Lusitania

As events escalate toward the momentous sinking of the British passenger liner LUSITANIA by a German U-boat during WWI, this comprehensive history reads almost like a novel, and that’s exactly how Scott Brick narrates it. He adds emphasis where needed, goes quieter when appropriate, and varies his pacing effectively. His narration doesn’t get in the way of the writing—it enhances it. And during the sometimes dry and lengthy history sections early in the work, he carries listeners along. In print, readers might be tempted to skim or even skip these passages, but Brick makes them easy to listen to. R.G.C. Winner of AudioFile Earphones Award, 2016 ALA Media Award, 2016 Audies Finalist © AudioFile 2015, Portland, Maine [Published: FEBRUARY 2015]