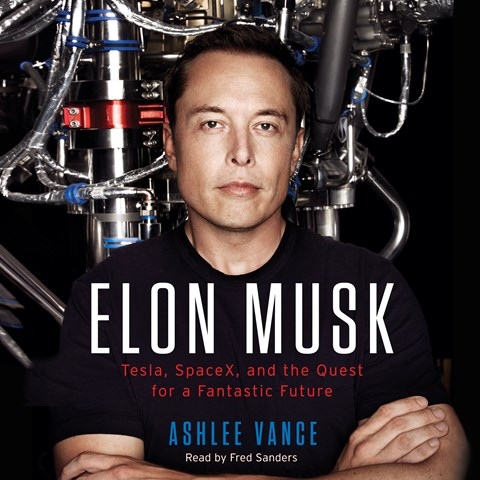 ELON MUSK Tesla, SpaceX, and the Quest for a Fantastic Future

Fred Sanders narrates this smartly written biography with the right balance of gravitas and entertainment value, providing accents for some of the major characters including a convincing South African accent for the story's star. Elon Musk, in case you're not familiar, is a 21st- century Howard Hughes, a captivating entrepreneur who has disrupted entrenched industries that include banking (PayPal), aeronautics (SpaceX), automobiles (Tesla), and energy (Solar City). His life story makes for a riveting tale—he was a bullied teenager who grew up to build electric cars and launch rockets into space (as well as to become the model for Tony Stark, Robert Downey's character in the Iron Man movies). The combination of great narration, well-written and well-researched content, and a bigger-than-life subject propels this nuanced work into the upper atmosphere of audiobook biographies. R.W.S. Winner of AudioFile Earphones Award © AudioFile 2015, Portland, Maine [Published: MAY 2015]