Home»Reviews»THE WAY TO STAY IN DESTINY 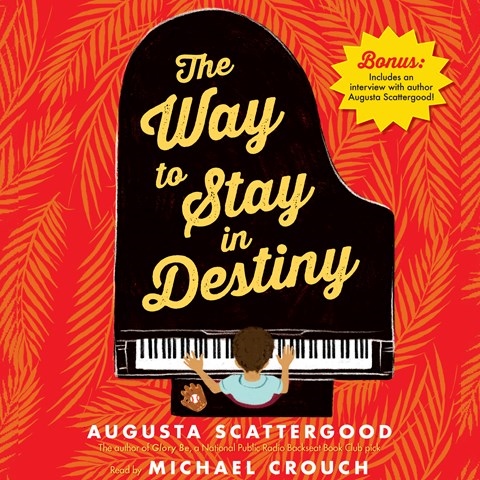 THE WAY TO STAY IN DESTINY

Thelonious Monk Thomas is a boy with troubles to spare. His parents are dead, the family farm in Kentucky has been sold, and he's headed for Destiny, Florida, with a mean uncle he barely knows. However, when Theo discovers the piano at Miss Sister's rooming house and makes friends with Annabelle, Destiny gains appeal. Soft-spoken Michael Crouch is masterful at creating character voices, even differentiating accents between the transplanted Kentuckians and the native Floridians. His likable Theo and kindly Miss Sister contrast sharply with the brooding and taciturn Uncle Raymond. Without the visual cue of quotation marks, it’s initially difficult to discern between Theo's many unvoiced thoughts and his spoken words, but this is a minor complaint in an otherwise strong production. Don’t skip the author’s afterword. L.T. © AudioFile 2015, Portland, Maine [Published: MARCH 2015]