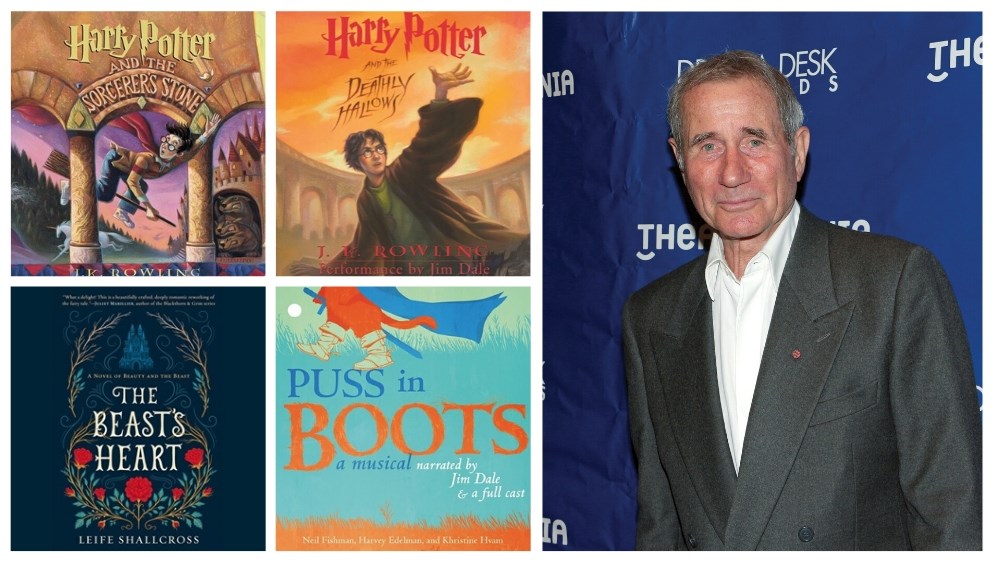 In Conversation with Narrator Jim Dale 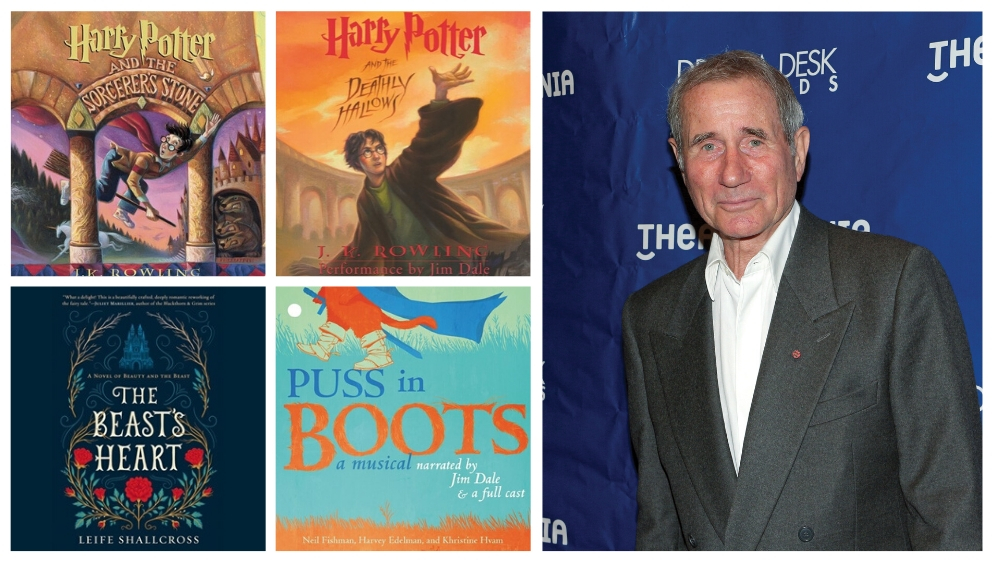 If you ask an audiobook listener about their favorite audiobooks, odds are good that they’ll say they adored Jim Dale’s narration of the HARRY POTTER series. What many listeners may not know is that HARRY POTTER AND THE SORCERER’S STONE was his introduction to audiobook narration. Jim came to audiobooks accidentally, and later in his career, and listeners are so lucky he did. Listen as Jo Reed and Jim Dale discuss his audiobook work and his extraordinary career in the entertainment industry.

“You’re now more intimate than ever. You’re just speaking to one person, listening to you, reading. And that’s a joy.”—Narrator Jim Dale

Jim Dale has narrated new takes on classics such as THE BEAST’S HEART, brightened full-cast recordings like SPIN: The Rumpelstiltskin Musical, and enlivened the worldwide bestseller THE NIGHT CIRCUS. Hear how he kept track of the dozens of character voices he brought to life in HARRY POTTER, and his unusual way he ensured he could record a second take of a line.

Read on for a partial transcript of the conversation.

Jim Dale: Well, I started as a comedian—not a comedian, a young man trying to make people laugh when I was nine years of age in the various talent shows that I did in our local community, and after six or seven years of training to be a dancer, I then decided to be a stand-up comedian at the age of 17 and a half. I entered a music hall which was still going in those days. It died off in the 1960s, but for 150 years it had been the principal form of theatrical entertainment for working-class Brits. It was family oriented, and that’s where I learned my trade. That’s where I learned to tell jokes that were not dirty or no crude language in it, and you had to be funny in those days for that audience to laugh at you, and that’s where, I think, I got most of my training for what would be coming on in the future.

Jo Reed: You worked with Lawrence Olivier, and he invited you to join The National Theatre.

JD: Lawrence Olivier saw me playing the various Shakespeare’s clowns in and around the Edinburgh Festival and in the West End of London, and he finally approached me and said, “We have a play at The National Theatre which needs an actor who can talk to the audience.” It’s called The National Health by Peter Nichols, who went on to write wonderful plays like Joe Egg, and so Larry invited me to The National Theatre and I stayed there a couple of years, sharing a dressing room with Derek Jacobi and Jeremy Brett, and I did a two-hander play with Anthony Hopkins, and I was on stage with Paul Scofield, and then Joan Plowright in Merchant of Venice with Larry himself playing Shylock, and I played Launcelot Gobbo. So it was a wonderful, wonderful experience.

JR: An extraordinary career that continues in various fields. How then did you get into the audiobook biz, where you are one of the shining lights there as well?

JD: That was an accident, a sheer accident. They were looking for someone with an English accent to be the narrator, and someone said to whoever it was at the publishing company, they said, “Well, there’s a guy called Jim Dale. He’s playing Off-Broadway at the moment with three other men in a play called Travels with my Aunt. One of the men doesn’t speak at all, so three of them are now doing 33 characters between them,” and of course, the publisher said, “Wow, that sounds fantastic. That’s the sort of guy we need.” So they approached me, asked me if I’d read the book, which I did. I loved it. They said, “Would you like to record it?” I said, “Yes,” and it was only after I had signed the contract that one of them said to me, “Well, how many characters did you play in the play?” and I remember saying, “Just the aunt and the nephew. The other two guys played 31 characters between them.” So there’s a shocked silence on the end of the phone, ‘cause they realized they’d signed someone who may unable to do any more than a couple of voices.

JR: And the book we’re talking about is Harry Potter.

JD: That’s correct. There were seven of them, as you know, and so I didn’t realize that the first book had, I think it was, 34 different speaking characters, but that was nothing compared to the final book, which had 147 different characters that needed a voice, so that was quite a challenge, quite a challenge.

JR: Well, it’s like your first run being a marathon.

JR: Well, it’s also keeping all those voices straight over the course of seven books that got continuously longer as the series progressed.

JR: Now that’s another feat. It’s one thing creating it, which is extraordinary, but then to be able to remember, yes.

JD: I don’t have much time to read the book. I’m given the book, and from the last book, for instance, book seven, it was so urgent that they only gave me a hundred pages at a time, and then I would record the hundred pages, then they’d give me another hundred pages. So I had no idea where the storyline was going, whether a character was going to be a villain or a goodie. I had no idea, so it was very, very tough to keep track of all the voices, and the way I did it was quite simply as I invented the voice, I would read the sentence that that character speaks into a small tape recorder, and say, “Page 48, Dumbledore, line 23,” and so that gave me some idea. When we came to it in the script I would stop and say, “Let me just listen to the tape recording of what I did at that particular moment when I was creating them,” and it would give me an idea of what that first sentence sounded like, and I’d be able to re-create that voice.

JR: Boy, the world that you create with your voice.

JD: I wish I could say I agree, but to be perfectly honest, Jo, I’ve never heard myself in any of the 40 audio books that I’ve made. I don’t want to hear myself because I’d want to do it again because in films and television you’re allowed to do take three, four, five, take fifty if necessary, but in narration it’s just take one. You have to just keep talking until you make a mistake, so I learnt a lesson very early: If I wanted to do a sentence again, I would just swear, and they’d have to stop the tape recording. I remember them so often saying, “Oh, Jim, don’t keep swearing, ‘cause we’ll have to do that again,” and I’d say, “Thank you. That’s what I’d like to do. I can polish it up now.” So I’ve never heard a Harry Potter book, but I’m very pleased with the reaction of those who have.

JR: What was the hardest thing to get used to when you got into that audio booth and started narrating as opposed to being on stage or in front of a camera?

JD: I suppose on stage you can add to the actual character that the playwright wrote words for by physical movement, by expression on one’s face. All that adds to the 100 percent character that you’re trying to create, but in narration, you really have to keep your hands in your pockets. You can’t go twirling your arms around to indicate that’s what your character would do. People are listening to this, so everything has to come out through the voice. Every type of expression and emotion has to be created by your vocal cords, and they become the most important thing that you have to offer, those vocal cords. So you have to treat them as if they were, and they are, the most precious things that you have as a narrator. I remember the first day I had to record Hagrid, and I recorded him as a gravelly old giant, and within 10 minutes I’d lost my voice. What happened then was we had to stop recording. We had to cancel the rest of the recording session, had to pay the assistants and the editors who were there for the day. It costs a lot of money to make a silly, stupid mistake like that, so any gravelly voice has to be one that you can sustain, so don’t put too much into it or you’ll just lose your voice as I did.

Enjoy the full conversation between Jim Dale and Jo Reed on our podcast.