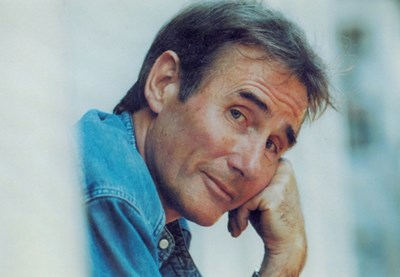 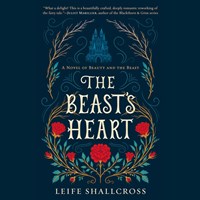 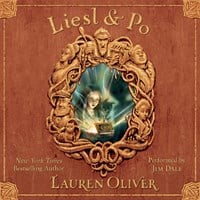 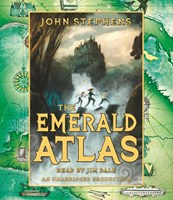 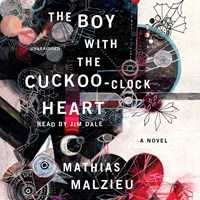 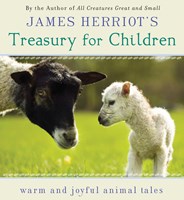 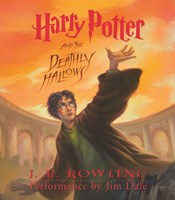 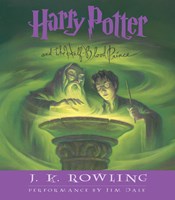 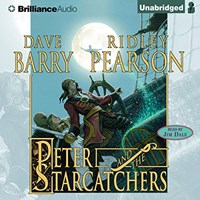 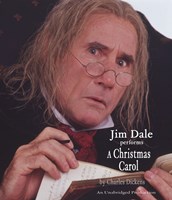 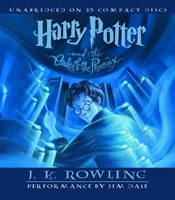 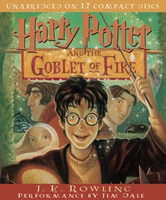 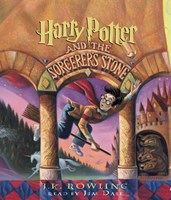 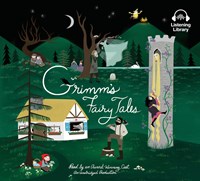 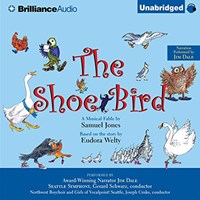 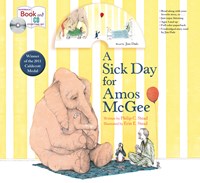 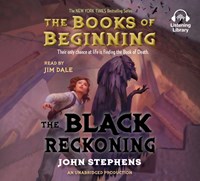 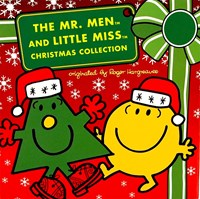 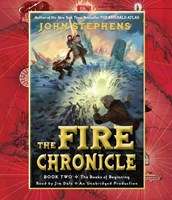 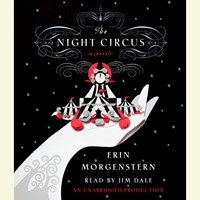 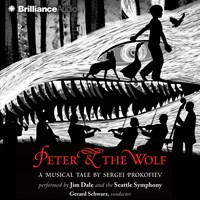 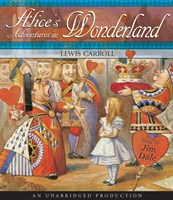 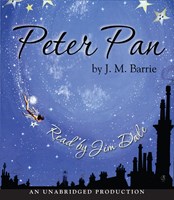 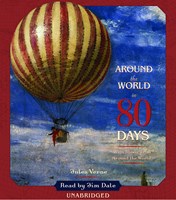 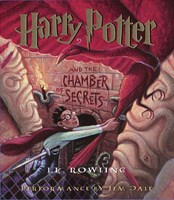 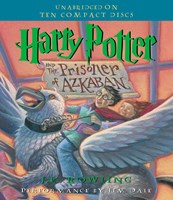 One of the most impressive aspects of Jim Dale’s narration of RETURN TO THE HUNDRED ACRE WOOD, a new story in A.A. Milne’s Winnie-the-Pooh series written by David Benedictus, is that he creates voices for a whole cast of characters, and none of them evoke any of the voices that he created for the Harry Potter series of audiobooks. That’s the mark of a true master of narration, that even such a well-known and well-loved voice can create something new. In addition to creating character voices for Pooh, Piglet, Tigger, Kanga, Roo, Eeyore, Christopher Robin, and more, Jim Dale sings all of Pooh’s “hums,” rhyming songs he makes up. Dale also shared a tidbit with AUDIOFILE about choosing voices and last-minute recording decisions: “Within thirty seconds of starting, I decided to swap the voice of Piglet for that of Pooh and vice versa. Thank goodness I did, or I know I would have spent the rest of my life kicking myself! What I have heard of the audiobook, I know I was right!” The result is an audiobook that’s charming and accessible to Pooh fans from any generation. Fans of Jim Dale can also find him reading Nancy Tillman’s THE SPIRIT OF CHRISTMAS and the latest in Dave Barry and Ridley Pearson’s Peter Pan series, PETER AND THE SWORD OF MERCY. —[2009]

When J.K. Rowling has Hagrid boom, Dumbledore hum, and Aunt Marge belch, listeners can hear exactly what that sounds like, thanks to Jim Dale's spellbinding narration. He gives voice to every wizard, muggle, house elf, goblin, giant, and hundreds of other characters who pass through Hogwarts, Hogsmeade, Diagon Alley, and the other magical environs of the Harry Potter series. He is a major part of why these fantastical volumes are among the top-selling audiobooks of all time.

He has received multiple awards for this achievement. During Queen Elizabeth II's 2003 Royal Birthday Honours, Jim Dale was named an MBE (Member of the Order of the British Empire) for narrating the (then) five Harry Potter audiobooks and "promoting English children's literature." On a more plebian plane, he's also the Guinness World Record holder for Most Character Voices in an Audiobook—for the 134 different beings he portrayed in HARRY POTTER AND THE ORDER OF THE PHOENIX . The audiobooks have been nominated for Grammy Awards— HARRY POTTER AND THE GOBLET OF FIRE won in 2000 for Best Spoken Word Album for Children—and Audie Awards—in 2004 ORDER OF THE PHOENIX won the Audie for Children's Title for Ages 8+ as well as Audiobook of the Year—and this year, the Harry Potter series was the first recipient of the Audio Publishers Association Hall of Fame Award. AudioFile has honored the series with numerous Earphones Awards, lauding his performances as bewitching, astonishing, brilliant, peerless.

Despite these accolades, Jim says the best reward by far has been the appreciation of his fans. One of the best compliments he ever heard came from a child after one of his readings: "He was about 8 or 9, wide-eyed, and he said, 'You sound just like the characters!' and I thought, that's it, I wouldn't want anything more. That's what it's about."

Audiobooks are only a recent addition to Jim's acting career, which includes a variety of stage and screen credits beginning in the 1960s. Among the highlights, he received an Oscar nomination for writing the lyrics to the film "Georgy Girl" (1966), and he starred on Broadway in "Scapino!" (1974) and "Barnum" (1981), receiving both a Tony Award and a Drama Desk Award for the title role. His stage career continues, and in recent years, Jim has starred in "The Comedians," which earned him a Drama Desk Award and Off Broadway's Lucille Lortel Award; played Scrooge in a musical production of "A Christmas Carol" at Madison Square Garden Theater; and stole every scene he was in as Mr. Peachum in the 2006 production of "The Three Penny Opera," for which he garnered a Drama Desk Award, an Outer Critics Circle Award, a Drama League Award, and a Tony Award nomination.

Even when he's not on stage, Jim is in the public eye as a narrator and enjoys performing for live audiences, especially when he can get kids in on the action: "I divide them into two groups, left and right, and we do the Quidditch match, and I have them cheering on one side and booing on the other. It brings the roof down." In October, he embarked on a two-week audiobook tour for his new narration of PETER PAN .

Yes, Jim has branched out from Harry and company; he's recorded A CHRISTMAS CAROL and AROUND THE WORLD IN 80 DAYS (both Audie Award winners for Classic Audiobook), as well as the adventures of another famous boy protagonist in children's literature, including the first two books in the Ridley Pearson/Dave Barry series of Peter Pan prequels, PETER AND THE STARCATCHERS and PETER AND THE SHADOW THIEVES . Pearson says that he and Barry were blown away by Jim's preparation and his skill: "Jim explained the evolution of each voice: how Bumbrake would have a little Cockney because she portends a position in the upper class but does not belong there. On and on. It was as if he'd done weeks of research into the exact nuance of each and every voice. With that kind of homework, it's no wonder that Jim Dale is at the top of his game. He could read the back of a cereal box and make it sound like poetry."

Does Jim wish he could expand his repertoire to other kinds of books? "I don't know whether I'd be any good at reading anything adult," he says. "In the sort of books I record, I'm allowed expanded sorts of characters. I won't say they're over the top, but Harry Potter does lend itself to creating strange voices, strange creatures as well as human beings, and so that's the advantage of being able to do something that's fictional and fantasy. I don't think I'd enjoy a spy thriller or a political book as much."

Whatever work he does in the future, Jim appreciates his audiobooks as a major legacy. "I have the greatest joy knowing that my voice is now recognized not just by the 4 or 5 million kids who have listened to Harry Potter, but also by the parents of those children who have sat in the car listening as well," says Jim. "So there are perhaps 12 million people my age who now know my voice. And audiobooks can still be appreciated in a couple hundred years' time—well after every memory of your stage life has disappeared."

So what's next? Well, the seventh (and final) chapter in Harry Potter's saga is due out next year, and it will undoubtedly be met with equal parts media frenzy and eager listeners of all ages who can't wait to get their headphones on.—Jennifer Dowell —December 2006

2010:  Just in time for the release of Tim Burton's film Alice in Wonderland, AudioFile spoke with narrators of Lewis Carroll's Alice's Adventures in Wonderland. A delight for listeners of all ages, Carroll's imaginative classic is a natural fit for audio, with plenty of outlandish characters and absurd situations for narrators to voice.

December 2007:  Every listener knows about the recording opus of Harry Potter, which concluded in July with Jim’s seventh exceptional performance. Add in a Grammy nomination for Peter Pan and Audies Award for Best Narrator for PETER AND THE STARCATCHERS .

2003: The year 2003 brought Jim Dale many honors and accolades. June 21 was the much-anticipated release date of the fifth Harry Potter book, HARRY POTTER AND THE ORDER OF THE PHOENIX . Record-breaking sales ensued, and Jim grabbed another milestone—a Guinness World Record for Most Character Voices in an Audiobook for the 134 different characters he enacted. "I had to know all the characters from the inside, see the world through their eyes, and love who they were, whether hero or villain," Jim says. And then at the Queen's Royal Birthday Honours in October, Jim was made an MBE, Member of the Order of the British Empire, for his work "promoting English children's literature." Early in the year, Jim starred Off Broadway in The Comedians, which earned him a Drama Desk Award and Off Broadway's Lucille Lortel Award. These accolades add to a growing list that includes a Grammy(r) nomination for HARRY POTTER AND THE SORCERER'S STONE ; an Oscar(r) nomination for the lyrics to Georgy Girl; an Audie Award for Best Solo Narration, 2001; and Earphones Awards for four out of five of the Harry Potter audiobooks. This December Jim plays Scrooge in A CHRISTMAS CAROL at New York City's Madison Square Garden Theater; if you miss it, he has recorded the Dickens classic as well.—2003 Narrator Yearbook"