Home » Articles » Listening Ahead: Toasting the First Lines of 2022

Listening Ahead: Toasting the First Lines of 2022

Following a few years in which we collected last sentences recorded by audiobook narrators as December closed, this season we kick off the new year with first lines they’ve recorded. As we did with those last lines, we’ve bundled the New Year’s first lines into a tale that might have been if all these contributions had formed successive passages of one book that never was. See the footnotes to find out who offered their narration initiation of the new year, what the forthcoming audiobooks are, and who wrote them.

It was a bittersweet drive back from the airport in Albany, seeing the twins off for their return to college.[1] Friday morning, I woke bruised and sore.[2] Just as poor sleep can lead to digestive problems, digestive problems can lead to poor sleep.[3] The wedding hadn’t happened yet, and already the marriage was a disaster.[4] When I opened my eyes, all I saw was white.[5] What if no one comes?[6]

Seeing the name "Wyatt Speeks" in my inbox hit me like a physical blow.[7] I couldn’t even take a breath before my phone rang.[8]

Robert Cohn was once middleweight boxing champion of Princeton.[10] I still regret not marrying my first love, especially in today’s era of online dating, where men are so quick to move on to the next available woman.[11] They would stroke my porcelain skin, murmuring kime go komakai.[12] You can literally get so sad that your heart shrivels up and dies.[13] It would be a crying shame if Lexie Gallagher threw up on her pretty white wedding dress.[14] No one could keep a good bitch down…but that didn’t mean she wouldn’t end up on the floor.[15]

I peered through the door (plate glass with a clear view through the dining area to the sparkling Caribbean).[16] I’d been looking for a sign.[17] The first time I heard Whitney's voice, she was singing "Greatest Love of All."[18] In August 2005, I drove out of New Orleans in the middle of the night, headed for I-59 in a rattling red truck.[19] It rained the next few days and Henley gave the kids more screen time than usual to preserve her sanity.[20] Nico was fidgeting.[21] The media coined a term for people like me: boomerangs.[22]

I killed my best friend yesterday.[23] Standing in the Grocery Outlet parking lot, Rachel Stroud should’ve been the kind of girl anyone would notice right away.[24]…and then I told her she could take my pompoms and shove them right up her stupid, fat ass.[25] This wasn’t how twenty-nine was supposed to feel.[26]

“To die is different from what any one supposed, and luckier.”[28] So much for the infallibility of the gods.[29] “I’m very much down to earth, just not this earth.”[30]

“Quick! It’s nearly time,” I shout, and we turn on the TV just as Jools Holland is counting down to midnight.[31] Fireworks blast off into the California night sky.[32]

In the troubled twilight of a March evening ten years ago, an old man, whose equipment and bearing suggested that he was fresh from travel, walked slowly across Clerkenwell Green, and by the graveyard of St. James’s Church stood for a moment looking about him.[33] The man walks through his Thousandyear Eve in the House of the Dead.[34] At the center of the world there stands a tree.[35] At first he thought it was an old brown bowl, just perched there on a bed of rocks, surrounded by reeds and bushes.[36] Small space dweller, I understand you because I’m one of you.[37] You’re the spawn of a demon.[38]

Mr. and Mrs. Seth Appleby were almost old.[39] Every Tuesday was game night.[40] Zach hit the ground again, his practice sword flying away as his opponent disarmed him.[41] Is it just my imagination or do these guys seem a little tense to you?[42] For fast-acting relief, try slowing down.[43] In other words, we are in possession of a kind of living pathological museum, the resources of which are considerable.[44]

The country manor was so quiet that when Lady Sophie Melling opened her eyes she could believe she was dead.[45] A flash of silver in the creek made Eda still.[46] Sarai steeped in a warm, scented bath, her head tilted back, eyes closed.[47] Kelly Watts leveled her camera at her work station, beyond which was the rest of her in-home office: all of it perfectly pastel and beige and white and a touch of shabby chic but mainly modern farmhouse.[48] A man falls into a hole with walls too high to climb.[49]

Images went through Maggie’s mind like a kaleidoscope: of the sky, the endless ocean, the beach balls and inflatable toys hanging outside the shop, her father carrying a bright green crocodile for them to ride on in the waves, collecting shells and sticking them onto matchboxes.[50] It sits at the bottom of her bag like an anchor and a parachute, this thing that will hold her steady and set her free.[51]

Elizabeth Grayson paused as the music of her violin vibrated beyond the last note.[52] Eoin Gordon raised his chalice once more to toast his twin brother, Ewan, and his new sister-by-marriage, Allyson.[53]

Let us now return to our main problem.[54] In May 2021, a CNN writer described critical race theory as “a concept that’s been around for decades and that seeks to understand and address inequality and racism in the U.S.”[55] One way or another, we'll find a path to victory.[56] “Halfway” sounds like a compromise.[57]

All our earthly belongings in hand, Nana and I ride the rails as fast as they’ll go, hoping we reach Eureka in time.[58] Inventions financed with public funds should inure to the benefit of the public, and should not become a purely private monopoly.[59] You're embarking on a courageous journey and exploration of your innermost being.[60]

[7]Girl in Ice by Erica Ferencik – Narrated by Vivienne Leheny

[9]The Silver Wolf by J.C. Harvey – Narrated by Peter Noble

[12]The Kimono Tattoo by Rebecca Copeland – Narrated by Theresa Bakken

[13]Bipolar Faith: A Black Woman's Journey with Depression and Faith by Monica A. Coleman – Narrated by Machelle Williams

[15]The Worst Guy by Kate Canterbary – Narrated by Natalie Duke

[18]Didn't We Almost Have It All: In Defense of Whitney Houston by Gerrick Kennedy – Narrated by Leon Nixon

[23]The Last Laugh by Mindy McGinnis – Narrated by Lisa Flanagan

[24]Blood Will Tell by Heather Chavez – Narrated by Sophie Amoss

[25]First and Tension by Tara Silvec – Narrated by Kelsey Navarro

[26]The Holiday Plan by Emma Lynden – Narrated by Kimberly Austin

[33]The Nether World by George Gissing – Narrated by Nicholas Boulton

[35]The Forest: The Secret Language of Trees by Susan Tyler Hitchcock – Narrated by Erin Bennett

[36]On the Farm: Robert William Pickton and the Tragic Story of Vancouver’s Missing Women by Stevie Cameron – Narrated by Erin Moon

[39]The Innocents by Sinclair Lewis – Narrated by Lee Ann Howlett

[46]Defender of Crowns by Tanya Bird – Narrated by Tim Campbell

[48]The Country Cottage by Elizabeth Bromke – Narrated by Cecily White

[54]The Revelations by Erik Hoel – Narrated by Sean Patrick Hopkins

[56]The Finest Hour: The Saga of Tanya the Evil by Carlo Zen – Narrated by Shiromi Arserio

[57]Meat Me Halfway by Brian Kateman – Narrated by Pete Cross

[59]Owning the Sun: A People's History of Monopoly Medicine from Aspirin to Covid-19 Vaccines by Alexander Zaitchik – Narrated by Johnny Heller

[60]The Body Awareness Workbook for Trauma: Release Trauma from Your Body, Find Emotional Balance, and Connect with Your Inner Wisdom by Julie Brown Yau PhD – Narrated by Jennifer Aquino

Kelsey Navarro photo by Photos 4 The People, Cindy Kay photo by Duston Todd, all others courtesy of the narrator. 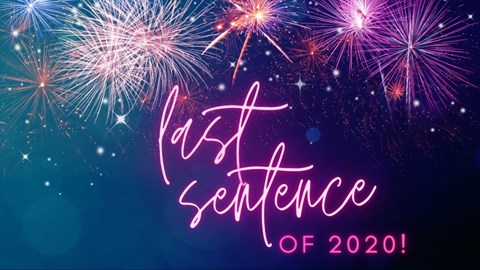 We continue the tradition of inviting audiobook narrators to share the last sentence they record during the outgoing year, and then we weave them into an original tale that may 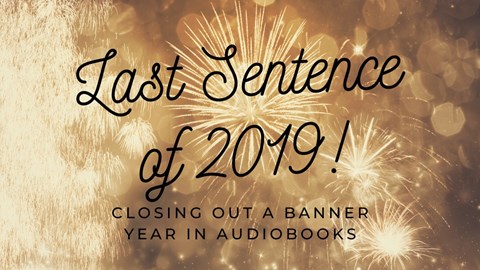 As the year winds to a close, audiobook narrators have been sharing on social media their #LastSentenceOf2018 — the last sentence of the last audiobook they recorded in