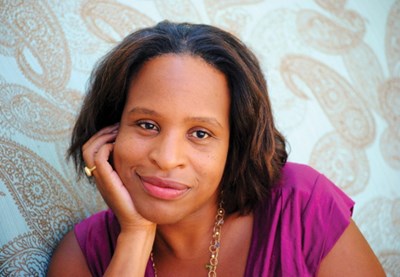 “Sometimes at the end of my writing day, I’ll just lie on the couch and listen.” 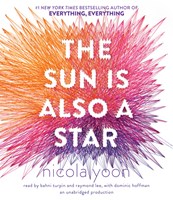 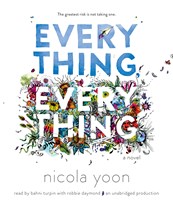 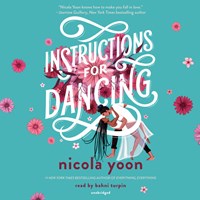 “I love love!” declares Nicola Yoon. And that’s clear in both her young adult novels. It’s also clear that she adores storytelling. These two passions have merged and flourished, winning her countless fans. Moreover, recently she garnered the 2017 Coretta Scott King/John Steptoe New Talent Author Award and a Printz Honor award for her second book, THE SUN IS ALSO A STAR.

Yoon tells a story about writing her first book, EVERYTHING, EVERYTHING. She was 70 pages into it when she decided that her heroine, Maddy, who has never been outside, would draw the world as a way to understand it. “I love Hawaii and the Hawaiian state fish, so I had an idea that Maddy would just draw the humuhumunukunukuāpua’a. I can’t draw at all, but my husband, David, can.” So Yoon woke him at 4:30 a.m. and asked, “Honey, will you draw me a fish?” She continues, “And to his unending credit, he didn’t question me; he just got up and made me a fish. And I loved that fish so much, and I thought, ‘More of this.’ My editor loved the idea, too, so David illustrated the book.”

In Yoon’s second book, THE SUN IS ALSO A STAR, the hero, Daniel, is Korean-American, and the heroine, Natasha, is Jamaican-American--just like Yoon and her husband, David. Her protagonists meet and fall in love in one day. “I do feel there are people you meet, and you know right away there’s something special about them. There’s something comforting about them and also exciting. I also love people falling in love with each other’s brains, and that’s why there’s a lot of talking and texting in my books. You fall in love with intellects and the other person’s ideas. I was lucky enough to have that with my husband.”

Yoon always was and still is a voracious reader. “I still read at least two books a month. I’m sort of compulsive about that.” She also listens to audiobooks. Currently, she’s immersed in Paul Beatty’s THE SELLOUT. “It’s brilliant, but hard and darkly funny.” She listens at all times of the day--“when I’m curling my hair, when I’m driving my daughter home from preschool. Sometimes at the end of my writing day, I’ll just lie on the couch and listen.” She only listened to the first couple of chapters of her own books, and that was for audition purposes. “Then I stopped. I get embarrassed. There’s something weird about listening to your own words.”

The first books Yoon loved were the Nancy Drew mysteries--“though there were also the Harlequin romances that my aunt hid under her bed to discourage my reading them.” But the author didn’t discover any books “with girls that looked like me” until she read Tony Morrison’s THE BLUEST EYE late in high school. She remembers thinking, “Oh, the main character of a book can be black. I didn’t know that could happen.” That’s a big part of the reason she encourages stories of diversity, both through her involvement in the We Need Diverse Books movement and through her own writing.

Sometimes stories come to Yoon from fan feedback. Her favorite email was from a 15-year-old girl. “She ‘really, really hated’ the ending of EVERYTHING, EVERYTHING, which holds a surprise involving the mother. This teen gave the book to her mother, who read it, and they talked about it. Then the teen ‘really, really loved’ the ending. I found it great that the girl came to understand the kind of overwhelming love that mothers have for their kids. For a long time you’re just ‘Mom’--like right now my daughter has no idea that I’m an actual human being, someone who had dreams and desires and wants before kids came along.”

Even though Yoon got her master’s degree in creative writing, she delayed her writing dream, working in finance for 22 years before she was able to get her first book published. “You have bills to pay and student loans, and it took a long time to get to the thing I really wanted to do. There are so many times you want something badly and when you get it you think: ‘It’s not as great as I thought it would be.’ But writing for a living is even better than I imagined it could be.”--Susie Wilde