Listen to Kathleen Turner read from her book SEND YOURSELF ROSES

"I’d love to do more audiobooks. There’s so much you can convey with your voice.” 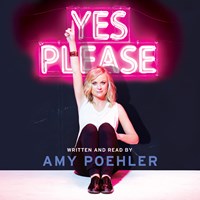 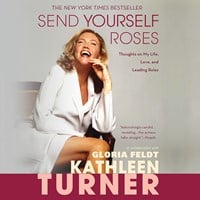 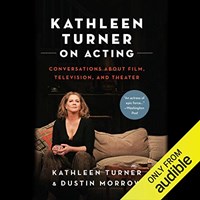 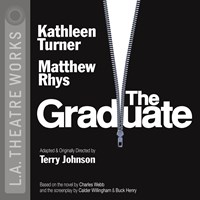 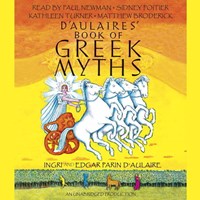 The producers scheduled eight days for Kathleen Turner to record her memoir, SEND YOURSELF ROSES. “But people always underestimate how quickly I work,” chuckles Turner in her trademark smoky voice. “We did it in five.”

Admittedly, it took a while to get to the recording session. When she and coauthor Gloria Feldt finished the book in 2008, Turner was beginning her battle with rheumatoid arthritis. Making an audiobook was the last thing on her mind. In fact, she forgot about it until 2015, when comedian Amy Poehler, whose book YES PLEASE Turner had recorded parts of, asked, “What about your book?”

Turner laughs, “That’s when I finally looked into it.” Still, the audiobook had to wait until she finished performing in the one-woman play A YEAR OF MAGICAL THINKING, at Arena Stage in Washington, DC. and  “It’s a one-hour-and-forty-one-minute monologue,” explains Turner. “Recording a book at the same time would have been too much. On stage, you have to guard your voice—it’s your most precious instrument. So, on weekends, with two shows on Saturday and two on Sunday, I carry around a little notebook in which I’ve written, ‘I am on voice rest. Only ask questions that I can answer with a nod or shake of my head.’ The funniest thing is that everybody starts to whisper to you. And I have to write, ‘No! You can talk!’”

At last, when recording day finally loomed, Turner realized that she hadn’t glanced at her book in years. “I got myself really worked up. I mean—what if it was awful?” Holding her breath, she peeked and discovered—“Whew!— she still liked what she’d written eight years before.

However, while she “loved the recording process, and [her] director and sound engineer,” Turner found the five days harder than expected. “I hadn’t realized how tough some parts would be to read aloud. My father’s death. Dealing with the arthritis. My marriage ending. The alcohol abuse.” She sighs. “I’d have to stop and get myself under control before I could start again.” Yet, offered the chance to rerecord the emotionally fraught passages, she declined. “I told them, ‘This is the truth. The other would be fake.’”

Finding the truth in a role is part of what Turner encourages when she conducts master classes. “I love to teach,” she says. So much so that, working with Professor Dustin Morrow, she recently completed a book about acting and the roles she’s played.

“Do you know, after this recording experience, I’d love to do more audiobooks. I might turn the new book into an audio production;” she muses. With her famously throaty laugh, she adds, “There’s so much you can convey with your voice, don’t you agree?”—Aurelia C. Scott

April 2000 -  Actress Kathleen Turner has teamed again with Charline Spektor of Airplay, this time as co-producer and one of the performers on a double-pack CD of The Complete Shakespeare Sonnets. “It was a wonderful project to work on,” Turner said in a recent interview. “The sonnets are for everybody, yet Americans often feel distanced from them. So we came up with the idea of having the sonnets read by American voices as a way to make them more accessible.” The resulting CDs feature such American actors as Brian Dennehy, Ossie Davis, Ruby Dee, Al Pacino and Fritz Weaver; they also include many fine British actors, including Natasha Richardson and Patrick Stewart. The actors contributed their time for free, which allows proceeds from the CDs to go to a charity—in this case, Planned Parenthood.

“In some cases, we asked the participants to read their favorite sonnet, and sometimes we suggested a sonnet for them to read. It was a process of discovery for everyone. We often had very different interpretations of the same sonnets; after all, the sonnets have lots of personal meaning for people. When we had two wonderful and different readings of the same sonnet, we just included both.” Thus, listeners can hear two readings of some of the most famous sonnets, including “Shall I compare thee to a summer’s day,” read by Al Pacino and Patrick Stewart, and “When to the sessions of sweet silent thought,” read by Kathleen Turner and Natasha Richardson. This last holds “hugely important memories” for Turner, so it is a treat to hear her version of it on the new production. With Shakespeare’s sonnets complete, Kathleen Turner is off to London’s West End to play Mrs. Robinson in a stage version of The Graduate.—Aurelia C. Scott