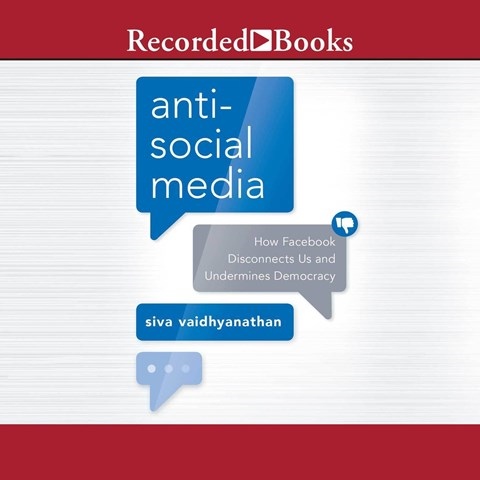 ANTI-SOCIAL MEDIA How Facebook Disconnects Us and Undermines Democracy

Jack Garrett gives a even, affable narration of Vaidhyanathan's overview of the influence of social media. This isn't a screed against tech; it's a thoughtful, well-researched history of how the Internet has evolved into a phenomenon in which emotions rule over thought. The author is critical of how Facebook is run as a business on autopilot, literally too big to govern and allowing users to promote unfounded information. This is a thoughtful critique of the naïveté of seeing the Internet as a great democratizer, when, in actuality, such movements can be strategically manipulated by governments that have little interest in democracy. Garrett's voice exudes the kind of neutral evenhandedness that characterizes Vaidhyanathan's research. S.P.C. © AudioFile 2018, Portland, Maine [Published: DECEMBER 2018]