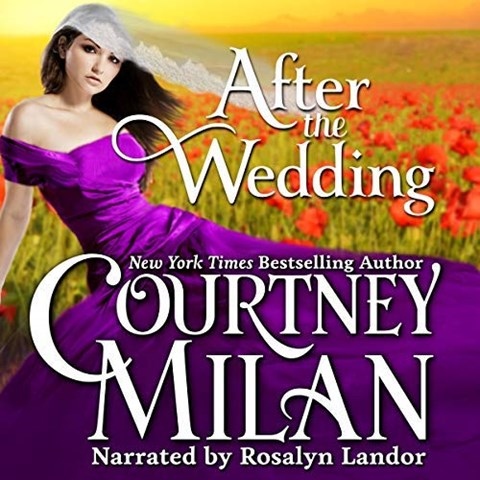 AFTER THE WEDDING Worth Saga, Book 2

Narrator Rosalyn Landor portrays two determined souls who sweetly fall in love. When Adrian Hunter agrees to do a favor for his uncle, he doesn't expect to be married at gunpoint. When Camilla Worth meets the handsome valet, she too is shocked that a forced marriage is in the works. Landor does an exquisite job depicting the uncertainty and pain of both characters because of their backgrounds. Adrian is the half-black son of a family that refuses to publicly acknowledge him, and Camilla has been passed from relative to relative like unwanted baggage. As they work together to solve the problem of their forced marriage, they begin to heal other wounds as well. Landor makes these moments truly meaningful. K.M.P. Winner of AudioFile Earphones Award © AudioFile 2019, Portland, Maine [Published: JANUARY 2019]