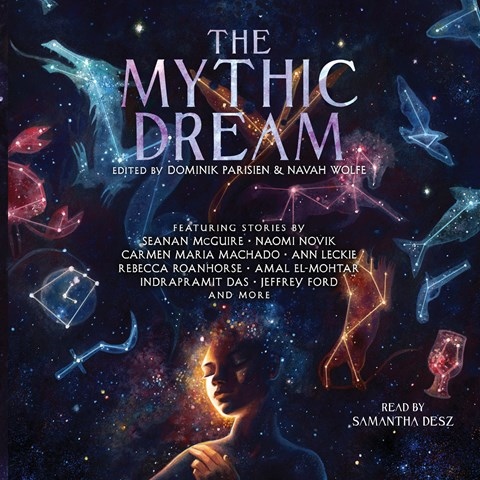 Narrator Samantha Desz metaphorically travels worldwide for this anthology of 18 short stories by various authors. Each is a retelling of a myth--some familiar, some not. In addition to Greek myths, the listener will hear works that are Japanese, North American Indian, Norse, Jewish, and more. For example, in Naomi Novik's "Buried Deep," Desz makes the love of a sister and brother in the myth of Ariadne and the Minotaur unforgettable. She also creates a haunting persona in Sarah Gailey's "Wild to Cove," a retelling involving Thetis, the mother of Achilles. In a more contemporary retelling of Artemis and Actaeon, Alyssa Wong's "Live Stream," Desz portrays a gamer who is executing a revenge plan toward a creep who posted a video of her. Without a touch of foreshadowing, she makes the ending that much sweeter. J.E.M. © AudioFile 2020, Portland, Maine [Published: APRIL 2020]