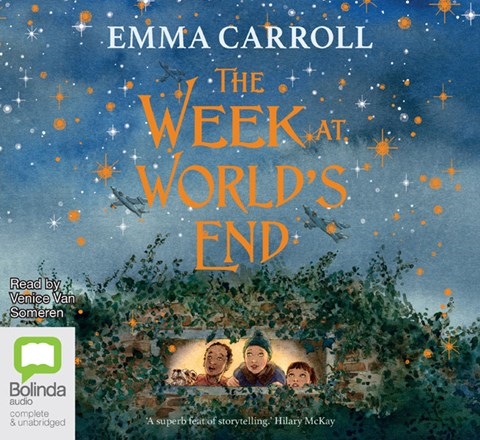 THE WEEK AT WORLD'S END

Venice Van Someren narrates this children's thriller set in England during the 1962 Cuban missile crisis. The story unfolds in six parts that coincide with the six days of nuclear standoff between the U.S. and the USSR. As the world holds its collective breath, two English kids face heightened drama when they find a mysterious girl on the run hiding in Stevie's coal shed. Van Someren moves easily between the accents and attitudes of the three conspirators--Stevie, an introverted yet quietly bold daughter of a working-class family; her best friend, Ray, a biracial boy whose dad hails from the American South; and Anna, an upper-class English girl with a desperate and secret plan. Van Someren deftly conveys their shared fears, joys, and determination against all odds. L.T. © AudioFile 2022, Portland, Maine [Published: AUGUST 2022]